Bidirectional cryogenic ball valves are successfully operable in a variety of cryogenic flow systems, especially in the Small-Scale LNG growing market. The combination of a ball valve, bidirectional sealing and cryogenic service revolutionizing piping systems designs. As trunnion/top-entry trunnion valves and globe valves were traditionally the main choice for media control and shutdown in cryogenic applications. Including tank filling and emptying, pressure buildup in closed and empty lines, gasification and liquefaction, and multi-use lines in LNG terminals, shipping, tankers, dispenses, pumps, and fueling stations. One of the main drivers for this was the fact that traditionally cryogenic ball valves are unidirectional, yet the availability of these with bidirectional sealing capability, is a game changer especially where systems are smaller and projects are challenged with an aggressive ROI.

The legacy choice of valves has more than one downside with a significant impact on the system performance, size and cost when compared to the alternative of using ball valves, including a smaller Cv size, the need for a linear actuation device for both shutoff and control, and additional complexity when emergency shutdown functionality is required.

Ball valves offer a higher Cv as compared to globe valves of the same size, which means that they are smaller in size without compromising on flow rate. As a result, the entire piping system can be reduced in size and this reduces the overall system’s size, weight and cost – significantly improving ROI in such applications.

Offering bidirectional, full Δp sealing capabilities, this valve can be used on a bidirectional loading and offloading single pipeline and as a shutoff valve for a storage tank, developing back pressure to the downstream side while empty without upstream line pressure.

It also has a safer design for cryogenic use, a smaller size and weight and a lower level of complexity than globe and trunnion valves. Moreover, it requires a simpler and smaller actuator (quarter turn), which makes the entire system smaller, lighter and much more cost effective.

In addition to all of this, for marine applications a full range of TAC approvals is available adding to the reduced maintenance requirements, safety and durability granted by these Habonim valves. 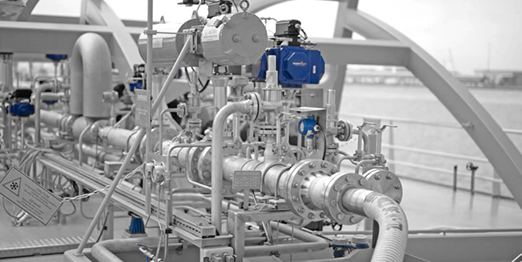 The bidirectional cryogenic floating ball valve is a game changer in the design of cryogenic systems, and has an even greater impact and benefits in systems used to transport, store and handle small scale LNG (SSLNG). The main reason for this is that these systems need to be smaller, lightweight and more cost-effective, while still maintaining maximal flow for shorter load and offload operations.

For this reason, the flow capacity of bottleneck components has a growing impact on the total efficiency of the system. As mentioned above, ball valves have a higher Cv than globe valves of the same size, and this offers a significant advantage for smaller systems.

To meet these needs, this patented technology has been successful implemented during the last few years in SSLNG systems. Such systems take advantage of the unique ball valve capabilities to facilitate full-bore flow, high flow efficiency and pipe drainage, and benefit from reduced piping size, overall weight, complexity and system costs without compromising on flow rates. 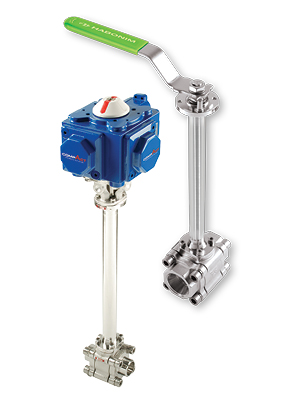 An example of such a novel design that successfully integrated Habonim’s unique bidirectional ball valve technology is the Titan FlexFueler 001. Designed and developed by Titan LNG, a leading full-service LNG supplier in North West Europe, this inland bunker pontoon was the first of its kind in Europe to supply LNG to inland waterway ships and to larger seagoing vessels while they load or unload their cargo.

The project involved multiple complexities, including the need to install bidirectional valves in a relatively small-scale vessel, budget restrictions and challenges related to transporting and dispensing small bulk LNG. To meet some of these needs, Titan LNG selected Habonim’s fire-safe, bidirectional floating ball valves for the Titan FlexFueler 001.

These valves offer bidirectional sealing capabilities for both standard on/off and flow control (V-ball) in both manual and automated operations. This was required in order to support two standard operational sequences:

The Titan FlexFueler 001 is fully functional, and to date, more than 150 bunker operations have been successfully completed, without the need to ever abort or cancel a single operation – resulting in a 100% delivery score of fuel to customers. Before each operation, all valves are tested for ESD operation (full open and close capabilities), and here too, the success rate has been 100%. As a testament to this success, Titan LNG also commissioned Habonim’s bidirectional ball valves for the FlexFueler 002, which was launched earlier this year.

Jacky Vinocur is Europe Sales Manager at Habonim Industrial Valves & Actuators, with more than 20 years of experience in the oil and gas industry.